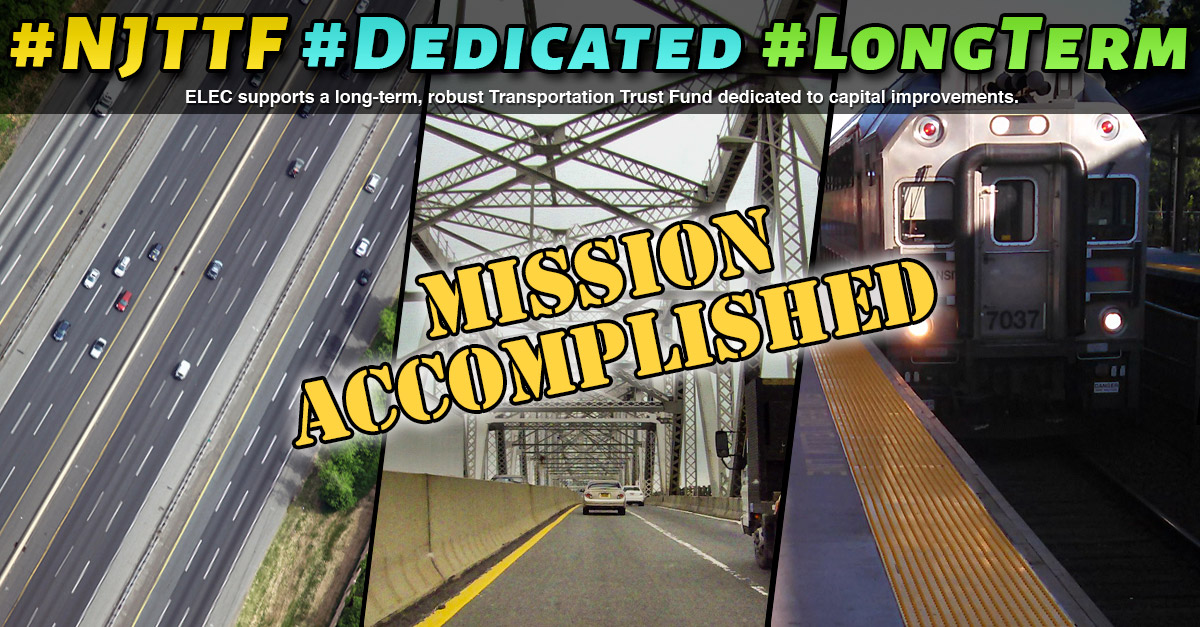 ELEC825’s multi-pronged efforts to reach a long-term funding solution for the previously insolvent NJ Transportation Trust Fund paid off with two major victories in the fall of 2016.

“We weren’t going to let Trenton do nothing,” said ELEC825 Director Mark Longo. “We moved the needle on public opinion and pushed politicians to resolve this crisis.”

With the launch of its RoadToRepair website and corresponding multi-media communications campaign, ELEC825 leveraged a broad coalition of business and trade groups, as well as union members to educate and change public opinion on the crisis.

The Legislature passed two bills to reauthorize the NJ TTF and provide a long-term, reliable revenue source of $2 billion per year for eight years. With Federal matching funds, that means New Jersey will have $4 million annually to invest in the infrastructure our economy and residents need.

In the 2016 November General Election, ELEC825 successfully campaigned in favor of “Public Question 2” which constitutionally dedicated all revenues generated by fuel taxes to be used for transportation capital improvements. This measure safeguards the TTF from being raided by future politicians – a practice that was partially responsible for the fund’s previous insolvency.

Our Work is Not Done

With the crisis averted, ELEC825 will continue to advocate for transportation infrastructure projects that help our economy grow and our residents have safer, less congested, more modern modes of transportation.

Reagan was Right: Now is the Time to Lean Into Infrastructure

Read More
Comments Off on Reagan was Right: Now is the Time to Lean Into Infrastructure

Legislation Update: A5194 Allowing for Expanded use of Recycled Asphalt Pavement Reported out of Assembly Committee

Read More
Comments Off on Legislation Update: A5194 Allowing for Expanded use of Recycled Asphalt Pavement Reported out of Assembly Committee

Investing in the Unseen Infrastructure

Read More
Comments Off on Investing in the Unseen Infrastructure