WORK IN PROGRESS: A labor union wants a seat at the energy debate

Home/Energy, Environmental/WORK IN PROGRESS: A labor union wants a seat at the energy debate

WORK IN PROGRESS: A labor union wants a seat at the energy debate

Gov. Phil Murphy has cast himself as a labor-friendly public official, but the draft of the 2019 Energy Master Plan he unveiled in June — which sets goals and policy guidelines through the mid-century mark and aims to make New Jersey 100 percent green by 2050 — may take a bit of the bloom off the relationship. 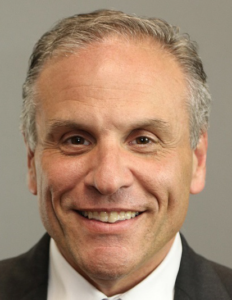 For Mark Longo, director of Engineers Labor-Employer Cooperative 825 (ELEC825) — which represents more than 7,000 operating engineers who work as crane and other heavy equipment operators, as well as mechanics, and surveyors in the construction industry and more than 1,000 contractors who employ them — the plan’s goals were admirable. But Longo still had some bones to pick with the document, which won’t be finalized until after September.

The big issue is natural gas and the infrastructure behind it. Although Murphy’s plan acknowledges that natural gas “is expected to remain the predominant electricity fuel source in the near future without a change in state, regional, or federal policies,” the document goes on to claim that the state must also “model, assess, and implement ways to minimize reliance on natural gas as the state transitions to a clean energy economy.”

But Longo said he believes that using natural gas helps lower carbon emissions and reduces costs to consumers. “As we transition to a renewable energy led future, we must ensure that sustainable policies are in place to balance affordability and reliability for our economy in the immediate,” he said.

In fact, he added, “there is simply no way to responsibly reduce emissions and keep energy prices affordable without natural gas, and the infrastructure which makes it available.”

Longo doesn’t see a conflict between natural gas and “a cleaner, more affordable and diverse energy mix for the residents of New Jersey.” Instead, he said, ELEC825 shares “our state leaders and policymakers’ goals of reducing greenhouse gas emissions and addressing climate change. However, it is imperative that in pursuit of these goals we do not simply allow good intentions and symbolic wins to distract us from meaningful progress.”

Nothing set in stone

At the same time, he’s encouraged by the fact that the Energy Master Plan is still in its early stages. “We believe that for this document to strike the correct tone and be a ‘10’ on all scales of importance, we’d like the Energy Master Plan final to reflect our economic reality and articulate a clear, actionable path to lower emissions that doesn’t jeopardize our economy,” according to Longo. “It presently sets out to accomplish laudable goals and is right to promote investment in solar and wind infrastructure, but we need to focus on the facts, take a true assessment of our energy needs and make sure we have a real plan to achieve the transition — that is where we believe the current draft falls short.”

Murphy’s comprehensive clean energy approach — which puts a lot of emphasis on solar and wind resources — will require transmission lines, and other infrastructure “to assist with a smooth energy transition,” noted Longo. Building solar and wind systems “will also create thousands of good-paying construction jobs,” he added, but warned that gas pipelines and other infrastructure improvements shouldn’t be excluded.

“Our members, and the rest of New Jersey, will benefit from the construction of the energy infrastructure we need to support a clean and prosperous future,” he said. “Expanding our existing energy infrastructure, with pipelines in particular, will accomplish something students usually theorize about in classrooms: reduce costs for consumers, increase economic benefits, and provide the reliability and redundancy in the system for the security it currently lacks in certain areas of the state.”

To buttress his claim, Longo pointed out that some New Jersey energy companies recently filed for natural gas rate reductions, “because of the abundance available on the market.” That’s great news for their customers, but “we do not presently have the infrastructure in place to move the additional gas,” he added. “Doing so would mean the creation of thousands of jobs and millions pumped back into the economy. Unfortunately, this ‘everybody wins’ scenario is not what the EMP currently lays out.”

He also doubled down on criticism of the master plan as it’s currently drafted, saying that the challenges of meeting the state’s clean air goals depend on “how we address the issue — do we use rhetoric or energy facts? Simply put, the goals outlined in the Energy Master Plan draft are presently unattainable with existing technology.”

“The EMP is a living document that will guide New Jersey through the next 30 years,” according to the state’s draft document. “Given this, it acknowledges that there are impending technologies that are not yet available or discovered, and allows enough flexibility to use today’s tools but also incorporate tomorrow’s advances. The Final 2019 EMP will incorporate the findings of the Integrated Energy Plan as well as several other studies, and will include specific and targeted dates and metrics, which are not yet reflected in this draft, to reach 100 percent clean energy and at least an 80 percent reduction in greenhouse gas emissions by 2050 while expanding the clean energy innovation economy and supporting Gov. Murphy’s vision for a ‘Stronger and Fairer’ New Jersey.”

As Longo sees it, the draft “is betting on advancements instead of utilizing existing generation resources as the bridge.” It hits home, he added, since, “This is not a future that operating engineers are willing gamble on. For example, our present battery storage technology does not meet our present energy needs. That means, when the sun isn’t shining or the wind isn’t blowing at the consistent rate, we will not have the ability to turn the lights on or power our devices without interruption. This is not acceptable.”

But it’s also not the last word. The EMP is still just a draft, and Longo’s organization is trying to influence the discussion. Earlier this year, for example, ELEC825 launched an “Energy Reality Check” campaign that incorporates television, radio, and digital advertising “to document the risks New Jersey faces if it does not incorporate natural gas into its energy mix.”

The campaign will continue as the state Board of Public Utilities solicits comments. “We plan to take a very active role in the process,” Longo said. “We will engage with lawmakers and others. The opportunities are boundless — we can properly develop a green technology industry that can be the blueprint for the rest of the United States while capitalizing on the abundance of clean natural gas we presently generate nationally to continue growing one of the world’s strongest economies. More locally, operating engineers are committed to being the most highly skilled and trained workforce when it comes to our energy infrastructure.”

Reprinted with permission from NJBIZ. Copyright © 2019. All rights reserved. 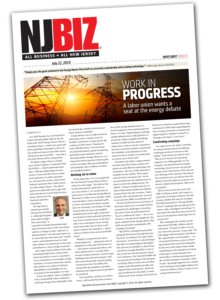 PDF of story is available here.